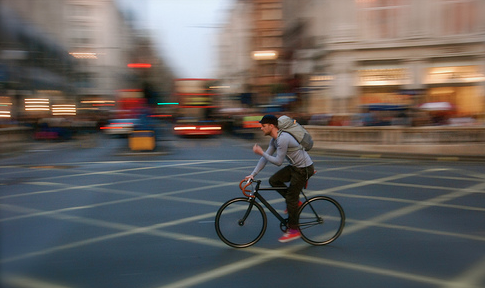 London’s mayor Boris Johnson want to change cycling forever in his city. Last week, he revealed a 913 million (British pounds) (approximately $1.4b USD) 10-year plan for cycling infrastructure. Johnson’s plan is part of his overall initiative called “London’s Cycling Revolution,” which pledges a 400 percent increase in cyclists by 2026, ” while making two wheeled transport safer, more attractive, and more convenient.” The government, he says, ” is investing more than ever before in cycling and funding is increasing to the point where levels of investment are approaching those of other leading European cycling cities.”

From the UK’S Guardian on the latest plan:

A new set of superhighways, some replacing the blue routes originally installed under Johnson, is envisaged to form an improved network, with a “superhub” at Waterloo, south London, to encourage rail commuters to switch en masse to cycling rather than the tube.

Meanwhile, in an attempt to effect concentrated change on cycling habits in suburban London, the mayor’s team plan what they call “mini-Hollands”, where up to three outer London borough councils can secure funding for transformative schemes.

In six-lane stretches of the busy Westway road, one lane of vehicle traffic will be removed for the new 15-mile “cycle Crossrail” from west London to Barking in the east.

While some in London think it could change the face of cycling forever in the city, but others aren’t sure the funding he’s proposing is adequate. The city’s transport committee has called on Johnson to double his cycling budget.