In January, the New York Times killed its environmental desk, assigning the 9 staffers to other departments, while pledging it wouldn’t affect coverage of climate change or the environment.

This week, the Old Gray Lady put the final nail in its environmental coffin, by dismantling its Green blog. 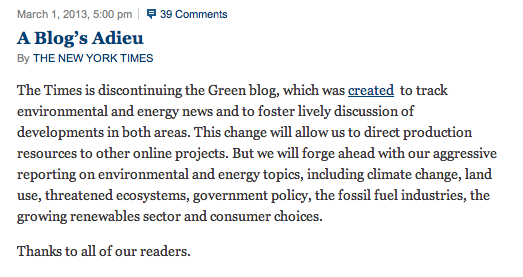 And no this doesn’t mean the Times is dismantling its coverage, just its vehicle for delivering it, sort of, kind of.

InsideClimate News did a great piece on the implications of this and it captures what we all know: the globe ain’t getting any cooler.

Here’s why, to me, this decision by the Times is disappointing, and honestly, ridiculous. When you try to schmush coverage areas together,  the issues themselves get watered down. If readers don’t think the publication  values specific areas of coverage, then why should they?   Now environmental issues will be on the Times’  Caucus blog, while energy on the Tech blog.  The positioning of the news is almost as important as the news itself; does a story about  hydraulic fracturing under a historical farm  belong next to a story about how Obama can overcome referencing Star Wars in sequester talks?

I work at a paper. I get it. Money is dwindling because no one can figure out a sustainable business model blah blah blah -insert-the-perils-of-journalism-industry here.  Buyouts are more common in newsrooms then pencils, So reporters are being asked to cover 15 different beats for less money and less resources and be experts and crank out big picture pieces.  But when does that stop being an excuse for you know, doing journalism? When do conversations or priorities shift – not necessarily disregarding one for the other — but committing time and space to doing journalism that still matters?

In this January report from the Project for Improved Environmental Coverage, entitled Environmental Coverage in Mainstream News: We need More, “coverage of the environment represented just 1.2 percent of news headlines in the United States from January 2011 through May 2012 for the thirty nationally prominent news organizations ranked in this report. Meanwhile, for some news organizations, entertainment and crime garner twenty times and sixty times more coverage, respectively, than the environment. ” (Editor’s note: it’s great that there’s a report that even tracks this.)

When news organizations make decisions about how they cover what is arguably one of the most pressing issues of our time, it makes our industry seem even more disconnected from the reality we’re supposed to report on. We’re not only shooting ourselves in the foot by pushing readers, ad revenue, whatever you want to measure, to sites like Huffington Post  — which, the report says, led national coverage of environmental issues with – and this is “leading” – three percent of its headlines being on environmental issues — we’re loading the bullets in the gun.

Meanwhile, the report notes, that success is relative to what local papers are doing. The Daily Herald in Washington State, for example, covered environmental stories six times more than the national average.

So why do we need to do better? Per the report: “The news media is a critical conduit that can engender better environmental understanding and a corresponding national stewardship ethic.”

And what does that do for the overall discourse about the issue itself? If organizations that can make investments in environmental coverage, like the New York Times, divert resources away from it, where does the responsibility fall?

I think that’s partly why I launched Rise and Tide. There are excellent sites out there like Grist, Mother Earth News, Adventure Journal, HuffPo,  carrying the banner, doing the  reporting, editing and aggregating of environmental and outdoor stories of the day. But until the issue becomes a true part of the national discourse, when the headlines are no longer about the fact a president mentioned climate change in an inauguration speech but actually, you know, did something about it, then we can all call it quits.

But until then, we can’t afford the silence. And it’s critical that we not only talk about the issues of climate change, renewable energy, and all the heavy stuff, but also the very things that are working well, that are going right, that attract us to the outdoors and make us appreciate the very earth we wish we to save.

Parting thought on the Green blog, and this sums it up for me: